sit in a comfy armchair, pop on a VR headset, select a show, and off you go!

V-Armchair is a collision between several of my pastimes and passions: designing rides, riding rides, watching other people ride rides, watching TV, presenting TV, playing with technology, crossing genres and disciplines. But most of all: thrilling an audience with new ideas and experiences. Where did the idea for V-Armchair come from?

I’ve been working with Middlesex University over the past few years (with the kind support of Festo) to develop Loco – a 6 degree of freedom motion platform. Loco was designed to be so simple, that it could be built as a secondary school project. Loco is the first ingredient for V-Armchair.

The second ingredient comes from my recent explorations into virtual reality. In 2016 I exhibited Oscillate at Sheffield Doc Fest, as part of Site Gallery’s VR Arcade group show. I saw Grayson Perry’s Dream House and Gabo Arora’s Clouds Over Sidra . As an occasional TV broadcaster, these pieces started me thinking about the nature of being a presenter in 360 degree video. I’ve occasionally presented to camera from the seat of coaster (a sequence I shot for Discover Channel International’s Engineering Thrills, has now been seen by over one billion people worldwide). It’s this one-to-one relationship between two riders (me plus my viewer), locked in physical proximity to each other, yet moving through space, that I wanted to explore. And of course, if I could record and play back motion through Loco, synchronised to recorded 360 video, well why the heck not!

But what ride should I shoot? I didn’t want my viewer to experience an inverting or looping coaster. Motion platforms aren’t good at replicating inversions, and too intense for the purposes of this project. I was interested in creating a mixture of intellectual as well as sensual engagement and wanted to produce a form of experiential documentary. And then all my birthdays came at once – well at least two of them. 2016 was the 10th anniversary of Thrill Laboratory, and the 20th anniversary of Oakwood Theme Park‘s Megafobia, which is one of the most loved wooden (and I should add, non inverting) roller coasters in the world. I gave Oakwood a call, and they said yes.

I put together a production team: Peter Passmore (360 camera, sound, and editing) and Haong Ha Le (VR replay), both from Middlesex University; and Paul Tennent (motion data) from the University of Nottingham. You can experience the resulting 360 degree experiential documentary on YouTube below. Granted, you won’t have your own motion platform, but if you can go the extra mile and watch it via a YouTube app on a smartphone, slipped inside a google cardboard (this one’s a fiver, and you’ll find others cheaper), with a pair of headphones,  then you’ll feel like you’re sat right next to me (no spewing please).

I wanted to test our results with an audience who’d never tried virtual reality, nor ridden a motion platform before. I also wanted to reach an audience who might feel too nervous or infirmed to ride a real coaster, but who might be coaxed into trying the project if it was presented… not as a ride simulator, but as “an experiential documentary, presented by TV’s Professor Brendan Walker“. After a couple of calls to Age UK, I had an audience ready to try for themselves. You can see some of the portraits we took on the day, which capture our riders’ expressions during their experience of V-Armchair.

The addition of a comfortable, high-backed, floral-upholstered chair, sitting atop a highly technological pneumatic machine appealed to me: a playful dialogue between the old and the new in so many ways. Carefully chosen from ebay for its appearances, the chair arrived with only one small flaw: it was a commode. Something I chose not to reveal to my sitters at Age UK.

What now? The Universities of Middlesex and Nottingham, along with Marianne Markowsky at Greenwich University, are still gathering and analysing our viewer’s responses to the experiment. Me? Well, I saw riders’ responses first hand – engaging and entertaining, even without a motion platform. I’d now like to produce a series of short experiential documentaries. I’m just waiting for the right conversation to happen with the right person. 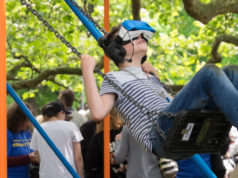 VR Playground for your audience 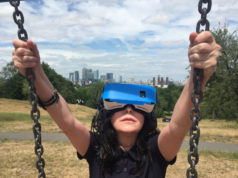 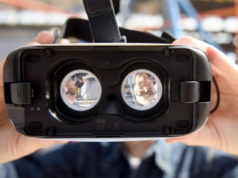 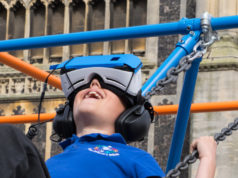 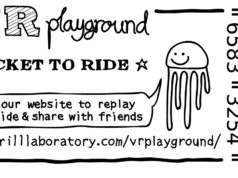 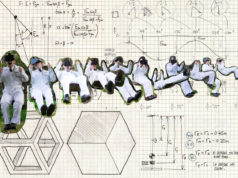 New cookbooks for the laboratory. I'll go put the oven …


New cookbooks for the laboratory. I'll go put the

What’s this going to become for Christmas? Wait till next …


What’s this going to become for Christmas? Wait

Setting up #VRPlayground at the Forum


Setting up #VRPlayground at the Forum