Home EXPERIMENTS which is most exciting: TV or Cinema? 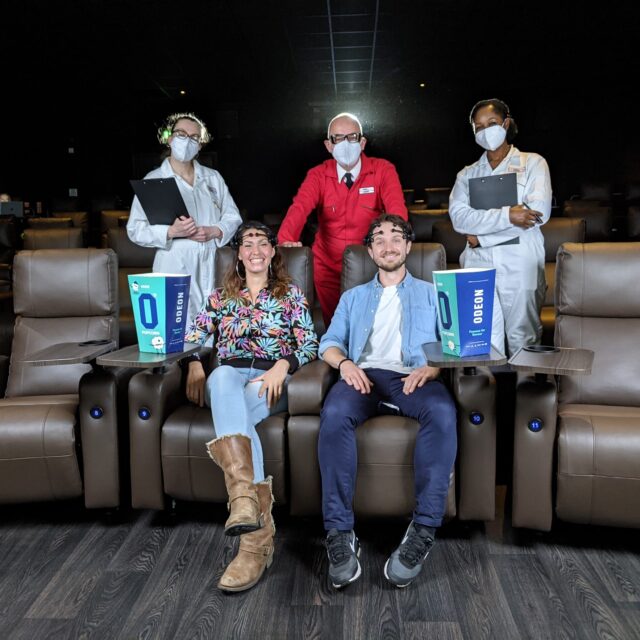 If you love public social occasions and location-based entertainment, then the darkest months of the coronavirus pandemic will have seemed very long indeed. Cinema was hit particularly hard, as large indoor public gatherings were outlawed. So what did movie-lovers do? Without any alternative, they gravitated towards private home screens and private Netflix accounts. What’s not to love about that – toilet breaks at the push / flush of a button; comfy pyjamas and a duvet; a never ending supply of tea and biscuits; a dog (or two in my case) on your lap? Hell, why not invest in a bigger TV, with the latest 4K LED screen, and a surround sound system with Simulate Cinema setting. The sensibilities of former film-goers are satisfied, with the movie auditorium just a flickering memory. You might even think ‘why was I so resistant to watching movies at home – this is actually jolly nice “pass me another Coop ice cream”‘ Just one tiny problem I can’t overlook: TV is just a simulation of the cinema experience. The role of Cinema in generating ‘the excitement of film’ shouldn’t be underestimated, or forgotten (and there’s a reason manufacturers claim to simulate something – because that ‘something else’ has qualities they want to be associated with). When viewing film on TV you miss the anticipation and event of a new release; the commitment of booking tickets; the preparation for a social occasion; the journey to and from a venue; feeling physically present in a picture palace, with the fever of a collective public experience; and the novel social etiquette of sitting quietly, without distracting or distraction. All this! and I haven’t even factored in an immersive big screen, a dolby sound system, set within a room that’s designed for one purpose: to excite your senses and amplify the excitement of your chosen film. I was approached by ODEON in May 2021 (c/o of their creative agency Mischief, part of the ENGINE group). They had a particular problem they wanted me to help them tackle. After so many months of lockdown, they feared that their audiences would have become habituated to the comfortable experience of watching movies at home, and that they’d be resistant to the idea of returning to Cinema. I had an idea:

why not compare the excitement of watching a film on TV to watching it in the cinema? Given that I’ve been banging on about the unique qualities of Cinema – their role in amplifying the excitement of film, and the absence of these qualities from the TV experience – it’s obvious who I thought was going to win. I guess you’re thinking the same. So why think about any of this at all if it’s so bleedin’ obvious? Most clients ask me to reveal something remarkable and unexpected about the qualities of their brand experience, and the unique affect they have on an audience. In this case, I recommended a much simpler approach:

The experiment itself was relatively simple, for Thrill Laboratory at least (see our installation Duality: one body, two brains or our ride NEUROSIS the world’s first brain controlled thrill ride ). A sample of participants was invited to watch the same movie clip (a high-octane clip from Fast and Furious 8 Zombie Cars – no, I didn’t choose the film) in a flagship ODEON Luxe cinema vs a comfortable domestic environment viewing on a good quality TV with surround sound. Some watched TV first, and some watched Cinema first. We monitored participants’ brain activity for signs of excitement and engagement, using 14 channel EEG (electroencephalogram) brain monitoring technology. The data was normalised, aggregated, analysed, and finally visualised to accompany a short report for editorial – all produced in-house. Headline results appeared in the Mirror, Express, and online at Yahoo Movies.

The result? Cinema can be up to 23% more thrilling than TV when watching the same movie.

You'll find #RIDEwithVR at the #Twister on …


You'll find #RIDEwithVR at the #Twister on @Bright

NOW SHOWING! on @RIDEwithVR is the first #VR experience from…


NOW SHOWING! on @RIDEwithVR is the first #VR exper

Here's an experiment produced by Thrill Laboratory for …

From @nnfest to #Holzminden! Off to pitch European leg of …