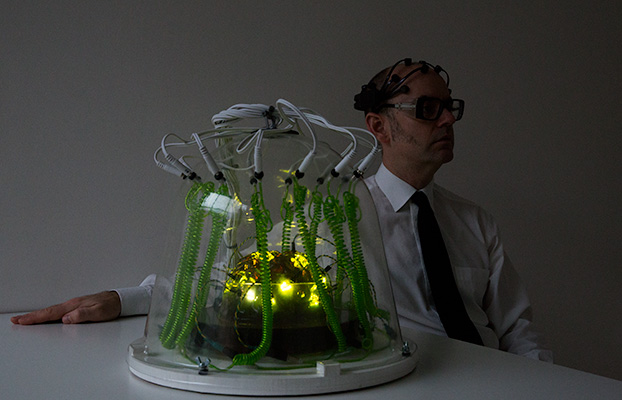 On Halloween 2014 Thrill Laboratory broadcast a live experiment created to reveal the effect of horror films on the human brain.

Data was monitored and streamed online for interaction by ‘science enthusiasts’ far and wide, via an animated brain-in-a-jar and an online visualisation.

Broadway Cinema commissioned the experiment for the Mayhem Film Festival.

The underlying technology allows data from any sensor to drive any conceivable remote animated object or interactive visualisation. It is massively scalable, enabling audiences to engage with data either locally or distributed over the web. A  range of future creative applications is scheduled for trial, including multimedia TV broadcast and a thrill ride.

Produced with help from the Performing Data research group, who made this short documentary about the project.

The Art and Science of Thrill Rides

Getting wet’n’wild on a slip’n’slide with …


Getting wet’n’wild on a slip’n’slide with

New cookbooks for the laboratory. I'll go put the oven …


New cookbooks for the laboratory. I'll go put the

We’ve got a screamer


We’ve got a screamer

It's the bonnie prince himself. Only polite to take …


It's the bonnie prince himself. Only polite to tak


Meet Mylo. Mylo and his dad just just watched my @

Setting up #VRPlayground at the Forum


Setting up #VRPlayground at the Forum

Wonderful reception from a super engaged audience at the the…